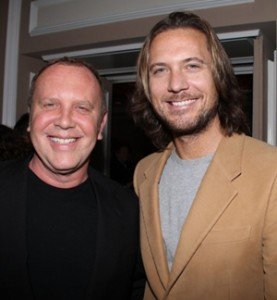 There won’t be a colossal bash, however. Kors says, “We have no plans for a major party, but we will be getting married privately.” They have already picked up their marriage license and will plan a small get together with few friends and family.

Kors previously talked about his relationship. From the article that came last        summer:
Their love bloomed when they were in Paris. They known each other since 1990, when LePere joined the company as an intern, but there was something about being together abroad that crystallized things. “We share a certain level of taste,” LePere says, “an American point of view, and I think we like to play with Americana. Over the years and the day-to-day process of dreaming together, things just naturally fell into place.” They started taking their meals together at the Parisian outpost of Joe Allen. “We could have quesadillas, they had cranberry juice,” Kors says. “I don’t know that either of us was really accepting the French lifestyle.