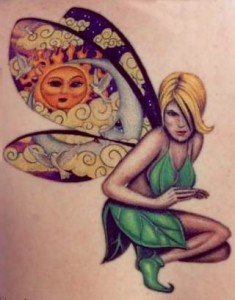 The first written reference to the “tattoo” or ‘Samoan Tatua’ appears in the journal of Joseph Banks, the naturalist aboard Captain Cooks ship ‘The HMS Endeavour’ in 1769.

Tattooing has been practiced for centuries in many cultures spread throughout the world. The Ainu , the indigenous people of Japan, traditionally had facial tattoos.

There are 5 types of tattoos

Tattoos have experienced a resurgence in popularity in many parts of the world, particularly in North and South America, Japan and Europe. The growth in tattoo culture has seen an influx of new artists into the industry, many of whom have technical and fine arts training.

During the first decade of the 21st century, the presence of tattoos became evident within Pop Culture and inspiring television shows and celebrities as well. The Chicago exhibition ‘ Freaks & Flash’ of 2009 featured both examples of historic body art as well as the tattoo artists who produced it.

There is no consistent Christian position on tattooing. They use signs or symbols of God .Tattoos are considered forbidden in Islam and Judaism. 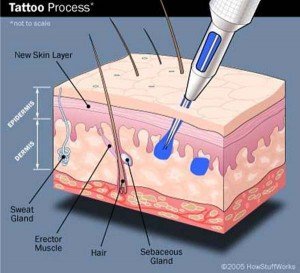 It involves the placement of pigments into the skin’s dermis, the layer of dermal tissue underlying the epidermis. After initial injection, pigment is dispersed throughout a homogenized damage layer down through the epidermis  and upper dermis , in both of which the presence of foreign material activates the immune system.

Some tribal cultures traditionally created tattoos by cutting designs into the skin and rubbing the resulting wound with ink, ashes or other agents.

The most common method of tattooing in the modern era is the electric tattoo machine, which inserts ink into the skin via a single needle or a group of needles that are soldered onto a bar, which is attached to an oscillating unit.

Tattoo artists  and people with tattoos, vary widely in their preferred methods of caring for new tattoos. Some artists recommend keeping a new tattoo wrapped for the first twenty-four hours, while others suggest removing temporary bandaging after two hours or less to allow the skin to ‘breathe’. Many tattooists advise against allowing too much contact with hot tub or pool water, or soaking in a tub for the first two weeks.

This is to prevent the tattoo ink from washing out or fading due to over-hydration and to avoid infection from exposure to bacteria. In contrast, other artists suggest that a new tattoo be bathed in very hot water early. 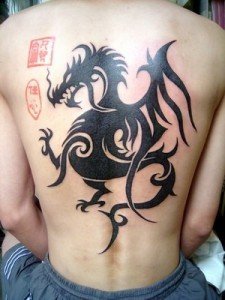 Because it requires breaking the skin barrier, tattooing may carry health risks, including infection and allergic reactions. Modern tattooists reduce such risks by following universal precautions, working with single-use items, and sterilizing their equipment after each use. While tattoos are considered permanent, it is sometimes possible to remove them with laser treatments, or even a tattoo removal cream fully or partially. Typically, black and some colored inks can be removed more completely.

General consensus for care advises against removing the scab that may form on a new tattoo, and avoiding exposing one’s tattoo to the sun for extended periods for at least 3 weeks; both of these can contribute to fading of the image. Furthermore, it is agreed that a new tattoo needs to be kept clean.