Nicki Minaj is a hip hop artist who acquired fame after being signed to Young Money. She was born in Saint James, Trinidad and Tobago, but moved to the Queens borough of New York City at age five.

Minaj began her music career in 2007 after she released her first mix tape Playtime Is Over. The mix tape was followed by the many more mix tapes which were released in 2008 and 2009. Her first label success was after rapper Lil Wayne discovered and secured a record deal with her with Young Money Entertainment with distribution from Universal Motown Records In August 2009.

She released her first debut album, Pink Friday in 2010 which became a commercial success, peaking at the top of the U.S. Billboard 200. And was later certified Platinum by the Recording Industry Association of America (RIAA) a month after its release. She became the first artist ever to have seven singles on the Billboard Hot 100 at the same time.Her second single, “Your Love”, reached number-one on the Billboard Hot Rap Songs chart, making Minaj the first female artist to top the chart unaccompanied. Many more records of hers have been sold and topped the charts.

Musically Minaj us great but when it comes to Fashion she is a walking disaster on shoes. Fashion is crazy with her outfits, to shoes to her jewelry and hairdos. Retro and Funk is her thing! 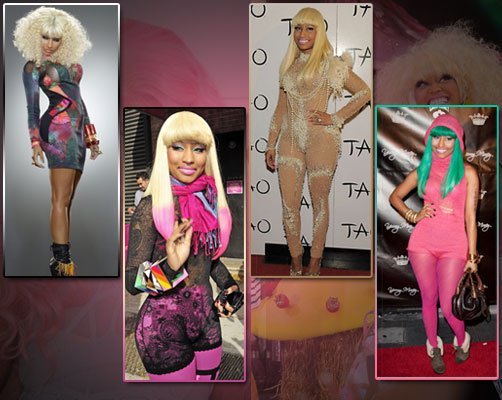 Always seen is flashy colours and trashy art, Nicki Minaj is one of the craziest artist, after Lady Gaga of course. Oh, Nicki Minaj. Why do you insist on being so unbelievably crazy on the red carpet and off? Her latest red carpet look is just as out there as her previous ones, but there’s just so much going on here that we simply had to talk about it.

Well for the beginning, Nicki’s wearing a huge swan around her neck. A swan. We’re all for animal jewelry, but why is it so humongous? Add to it the crazy ballerina tutu and the Wellies–seriously, Wellies on a red carpet?–and well we have nothing to say! No words can describe it.

Well it’s a well known fact that Nicki likes to be an individual and express her personal style, but we don’t think at all that this outfit is all that stylish. Especially with those crazy curly girly pigtails. Nope! Not forgiven this time!